My Road to Running The Dopey - Run Disney 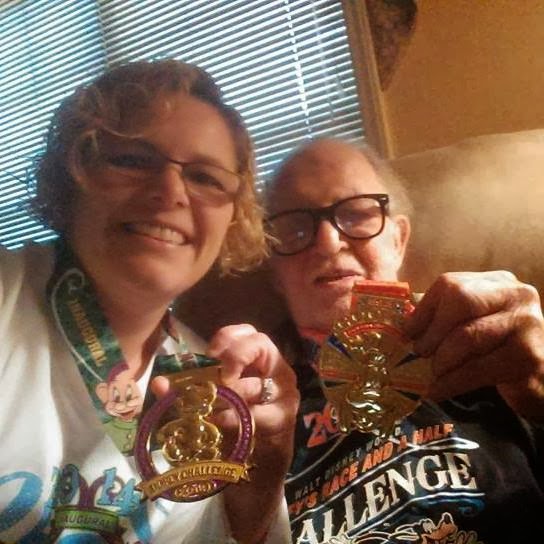 My 2014 Dopey Run Disney Experience began during Marathon Weekend 2013 when I started to tell people that I was planning to run "THE GOOFY" in honor of my Dad.  My Dad has Leukemia & had hip replacement in 2013.  Goofy is his favorite Disney character.  So, in honor of all the difficult things that he's been through, I wanted to put a Goofy Medal around his neck!


At that time, I had only done The Princess Half Marathon in 2012, so I knew I had A LOT of work to do and this was a challenge that I took very seriously.


As I got into September, I began stacking back-to-back runs and longer distances.  During my training, I also signed up for the Space Coast Marathon on December 1st, as at that point I knew that I should be ready to go 26.2 miles and wanted to do the entire distance with other people.  Long runs are really tough by yourself...but I didn't have any friends able to go 17-20 miles with me to have company during my training. 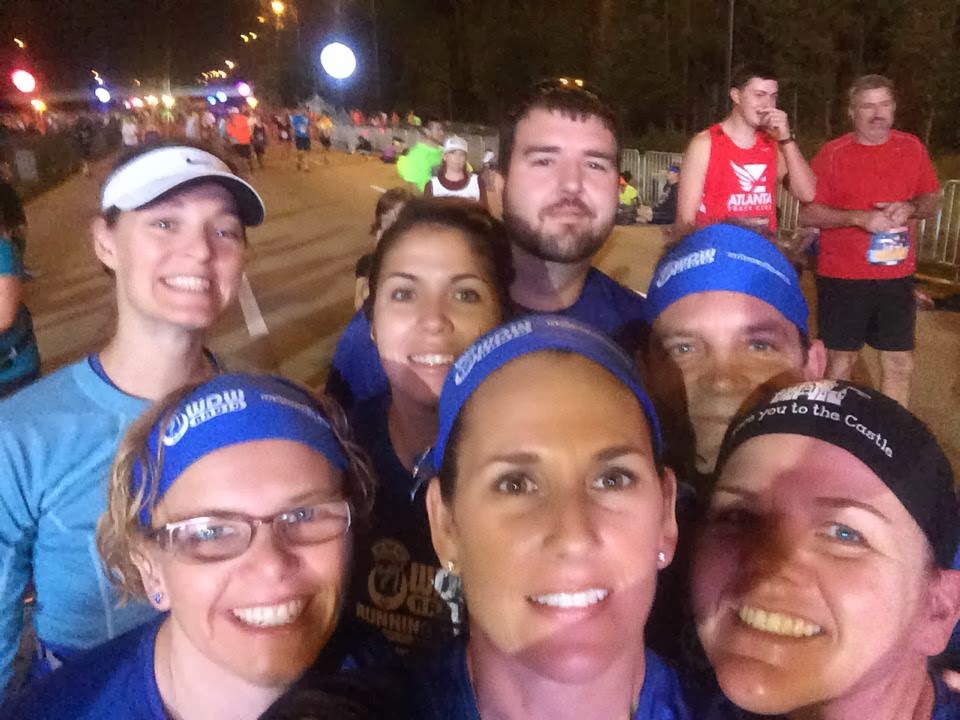 If you're a Disney fan, you'll enjoy running down the roads and "backstage areas" of Disney property.  Plus, you get a lot of really nice new running shirts!
The DOPEY includes four consecutive days of running challenges:
-  5K (3.1 miles) 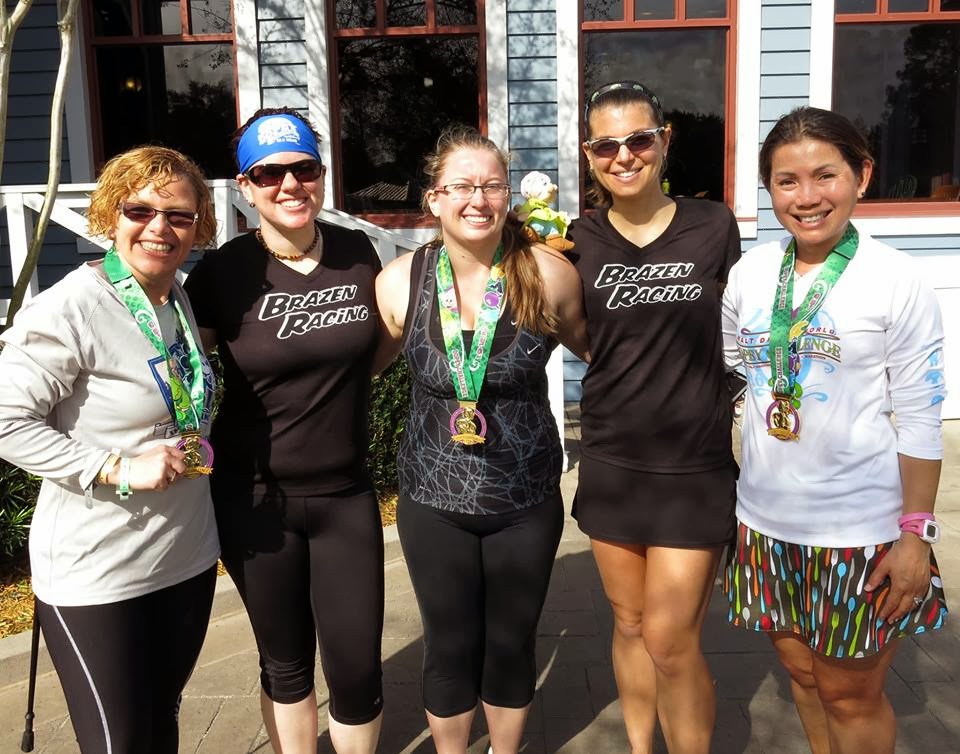 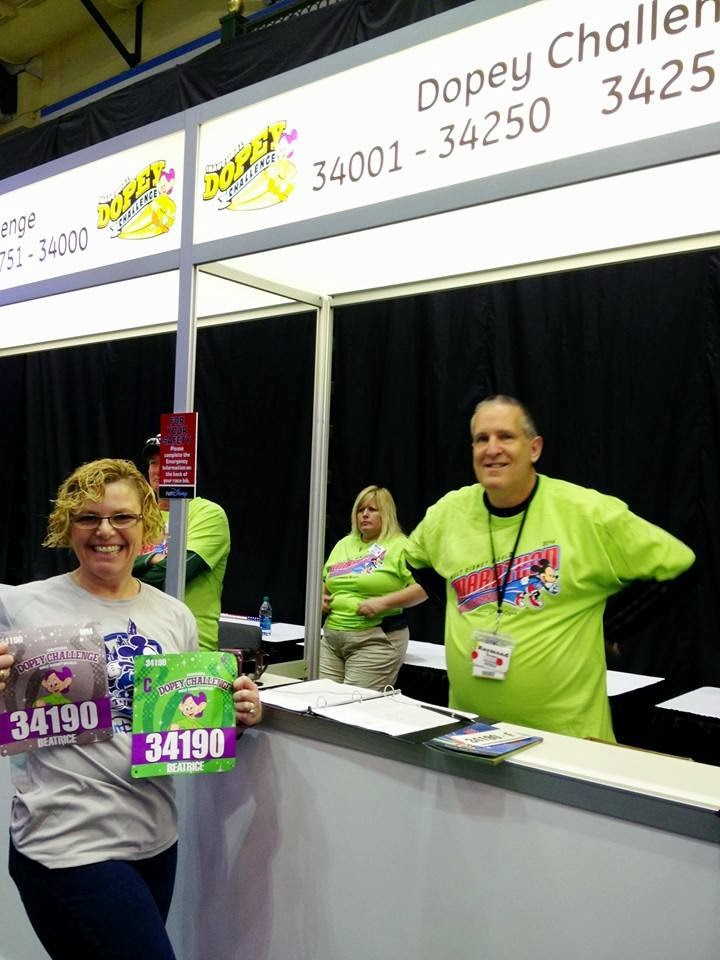 I worked hard to build up endurance and complete this challenge.

During my training, I signed up for a Marathon so that I could complete my FIRST FULL MARATHON by itself...without a four-day challenge.  I did proudly complete my first marathon in 4:54:10 --  UNDER 5 HOURS, keeping a pace of an 11 min/14 second mile...for 26.2 miles!  I had a wonderful conversation with Jeff Galloway, the Run Disney Training Expert and former Olympian Runner about his help during my training.  He also ran the Space Coast Challenge and qualified for the 2014 Boston Marathon with his time from that race.


We were given two bibs for the four races with instructions as one bib was for the 5 & 10K & the other for the Half & Full Marathons.  I had an added challenge as I had a problem with my bibs and had to rush back out to the Expo with only an hour before it ended.

Thankfully, the people at Runner Relations for Run Disney were wonderful in getting me 2 new bibs and saved the day!  I was now ready to run for the next several days!  I did have the opportunity to say hello to "The Voice of America's Marathons, Rudy Novotny at the Expo.  It's always a pleasure to be around such wonderful motivating and talented people!

I was amazed at how many people

My favorite parts of the run were through Animal Kingdom, where we got to see

some interesting LIVE animals & a cute mix of Disney Dogs.  This was my first time running through Animal Kingdom.  I loved the view from the

back side of Everest.  Another fun part was running through the Speedway with race cars, antiques and Exotic cars on display.  We even saw the Richard Petty car hauler on display for us.  I enjoyed running past the Tower of Terror and so many of the behind-the-scenes areas that were so special to see.  While on New York Street, I wondered if this is what it feels like to run the New York Marathon.  I did find that when most people were saying that they were going "to die" we had some Grave Diggers from the Haunted Mansion on our path.  I also enjoyed the Pirate Ship that came with a Meet & Greet with Captain Jack Sparrow & Barbosa...it's not too often that you get to see BOTH of these Pirates with the ship in the

background.  Doesn't it make you want to lace up your running shoes and join us?  We had so many wonderful runners and supporters throughout the four days!  I am so thankful for the wonderful people who truly made EVERY MILE MAGICAL...even the 3 miles through ESPN Wide World of Sports when we used our banana phones to call each other through our exhaustion.  The entertainment and laughs will remain with me, as my teammates gave me the strength to persevere!

From our first steps through the fourth and final

Finish Line, with four amazing teammates crossing together hand-in-hand & Mickey high-fived me, as I was on the end closest to him.  Then we all celebrated with a nice cold beer over our huge accomplishment!  I did make a very special purchase to remind me in my day-to-day life to always push myself out of my comfort zone and accomplish things that I will have to work to achieve.  I have the Disney Dooney & Burke...special memories that I use daily to remember to set goals and achieve them.  I'd also like to thank everyone who supported our WDW Radio Running Team...we truly appreciate everyone who helps us to make dreams come true through Make-A-Wish!

Posted by Beatrice Denis at 6:57 PM