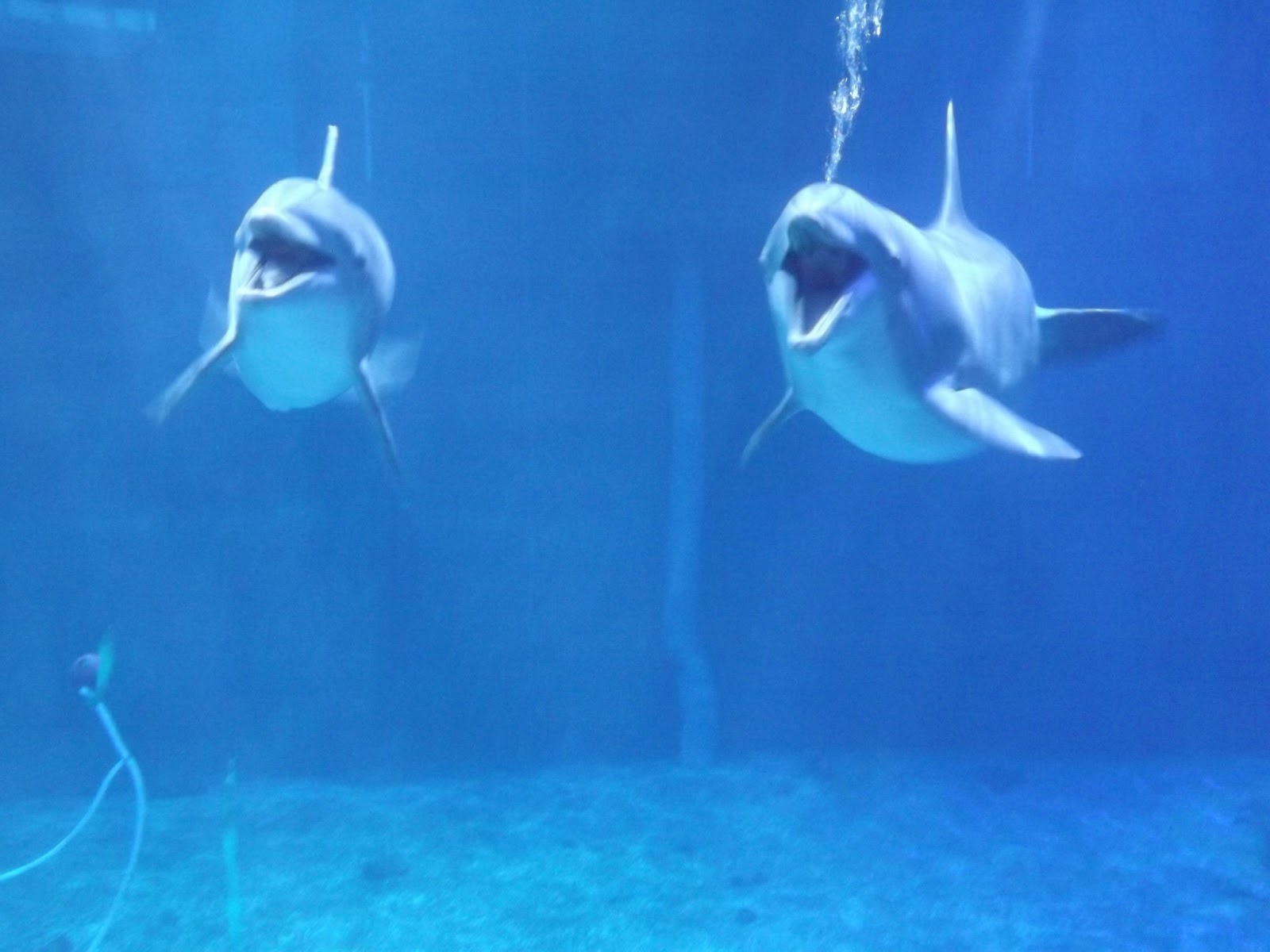 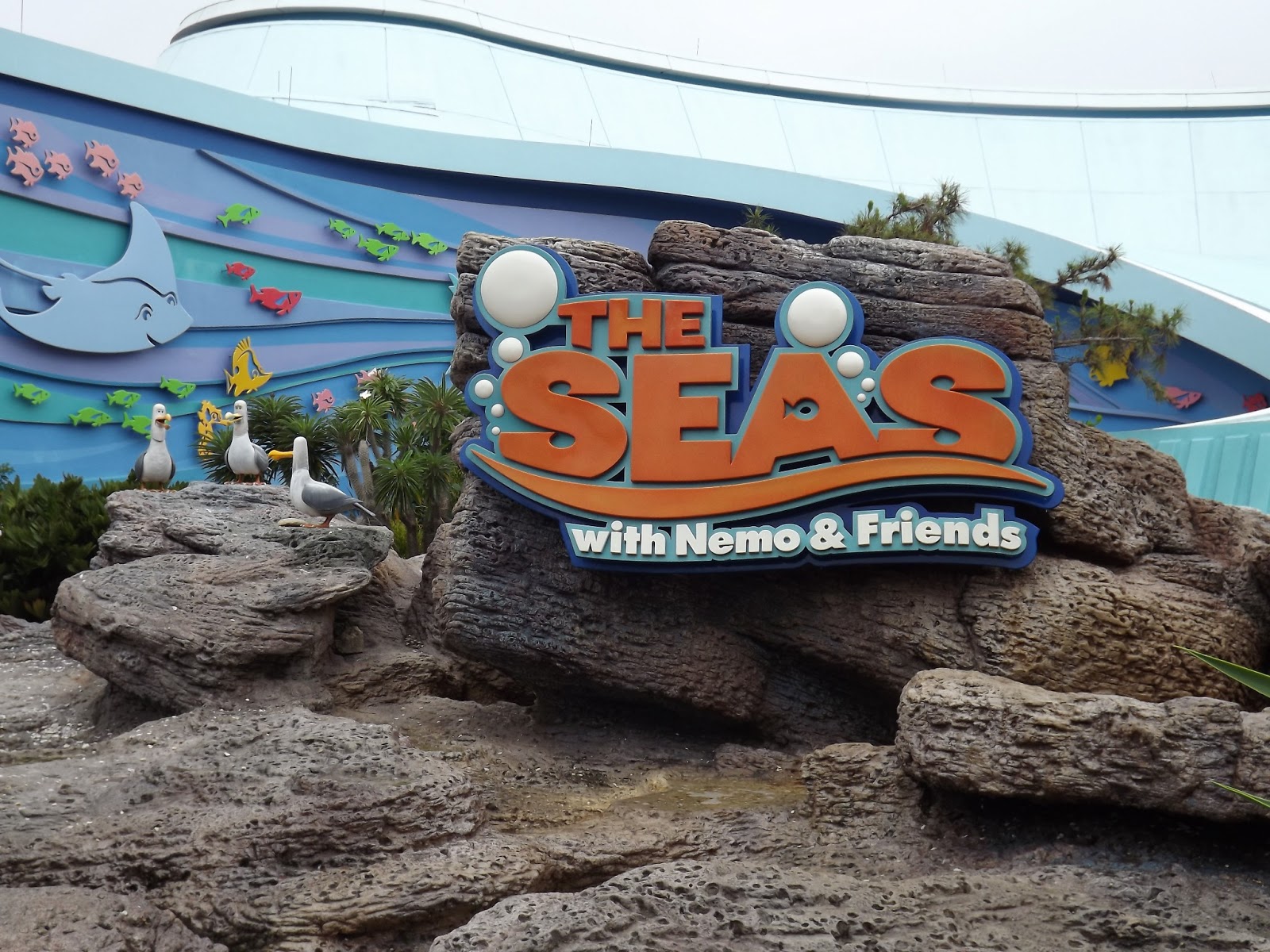 EPCOT's Living Seas Pavilion is the home of thousands of sea creatures and hosts a FUN Dolphin Presentation in the upstairs viewing area 3 times daily: 10:45am, 2:15pm & 4:15pm. 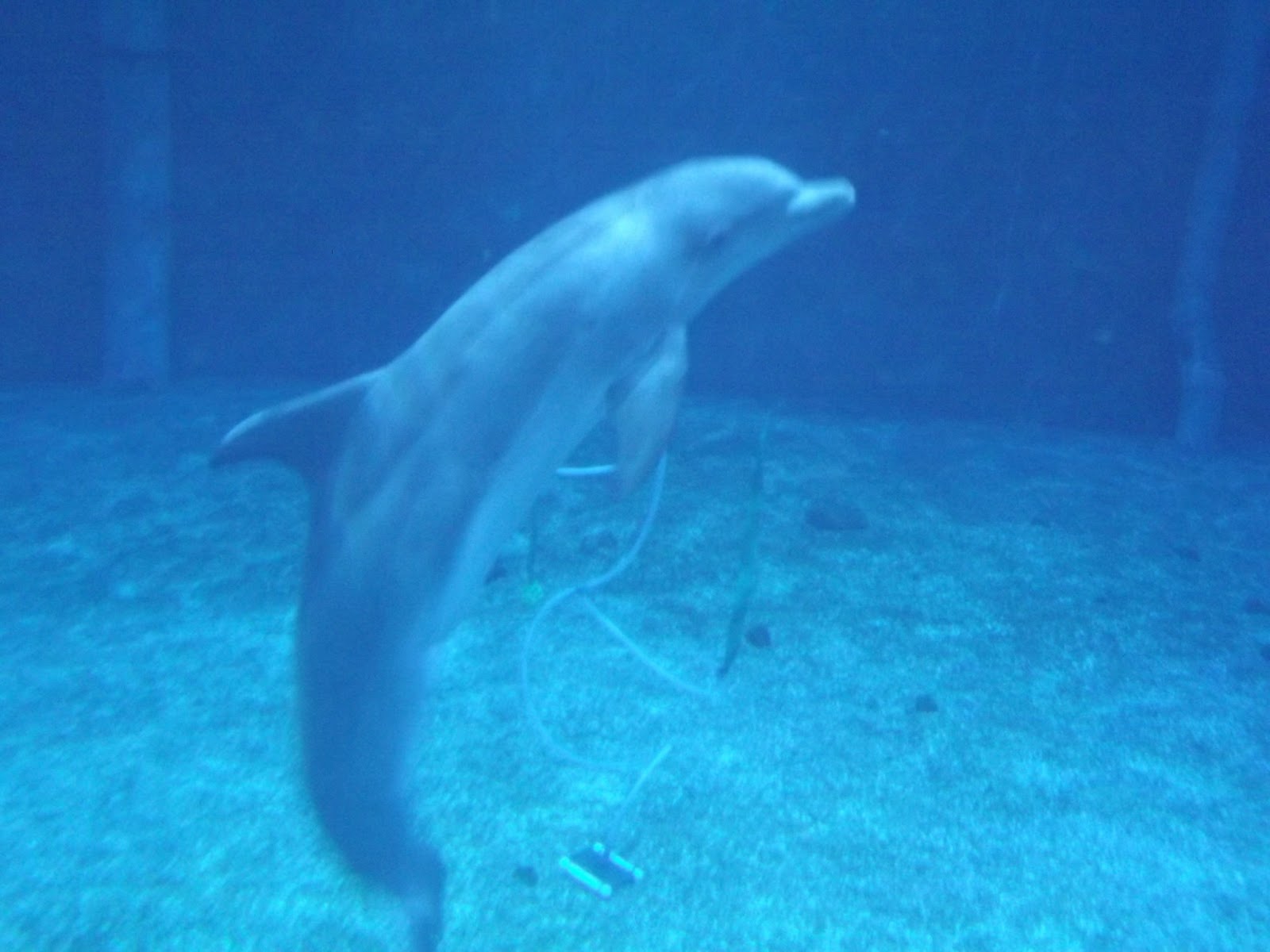 Walt Disney World has four male dolphins:  Calvin & Malomar were the two out during my visit.  Dolphins in the wild form "Diads" which means that they pair with a best friend, usually same sex & approximately same age and become best friends for life.  During the life of a dolphin, they will have male/female relations & make baby dolphins (called calves) - but typically will remain with their "best friend" for life.  In Disney's Living Seas Pavilion they have two pairs of diads:  Calvin & Malomar and Khyber & Ranier.  All four dolphins get along well, but if you happen to see all four out at the same time, you'll notice that the two pairs tend to hang out with their partner a little more than the others. 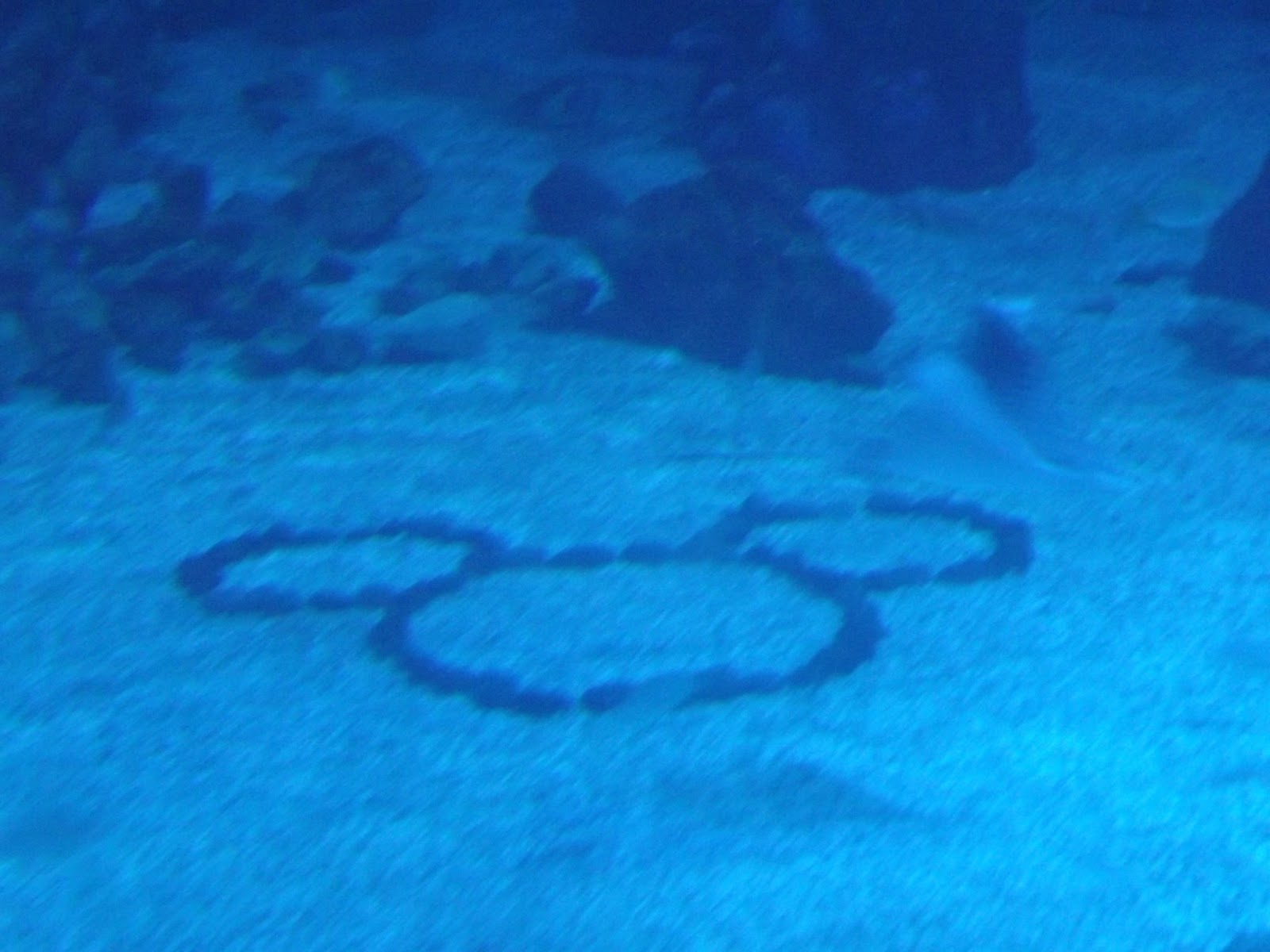 Some fun facts to share with others if you visit:
*  The food fed to the dolphins are the same mackrel, mussels, etc. used in Disney restaurants...so these dolphins eat quite well.
*  The water temperature is kept at 76 degrees and holds 5.7 million gallons of saltwater
*  Boy dolphins have an exclamation point mark on their bellies
*  They all have belly buttons...they're "innies" but you can actually see this as they swim by 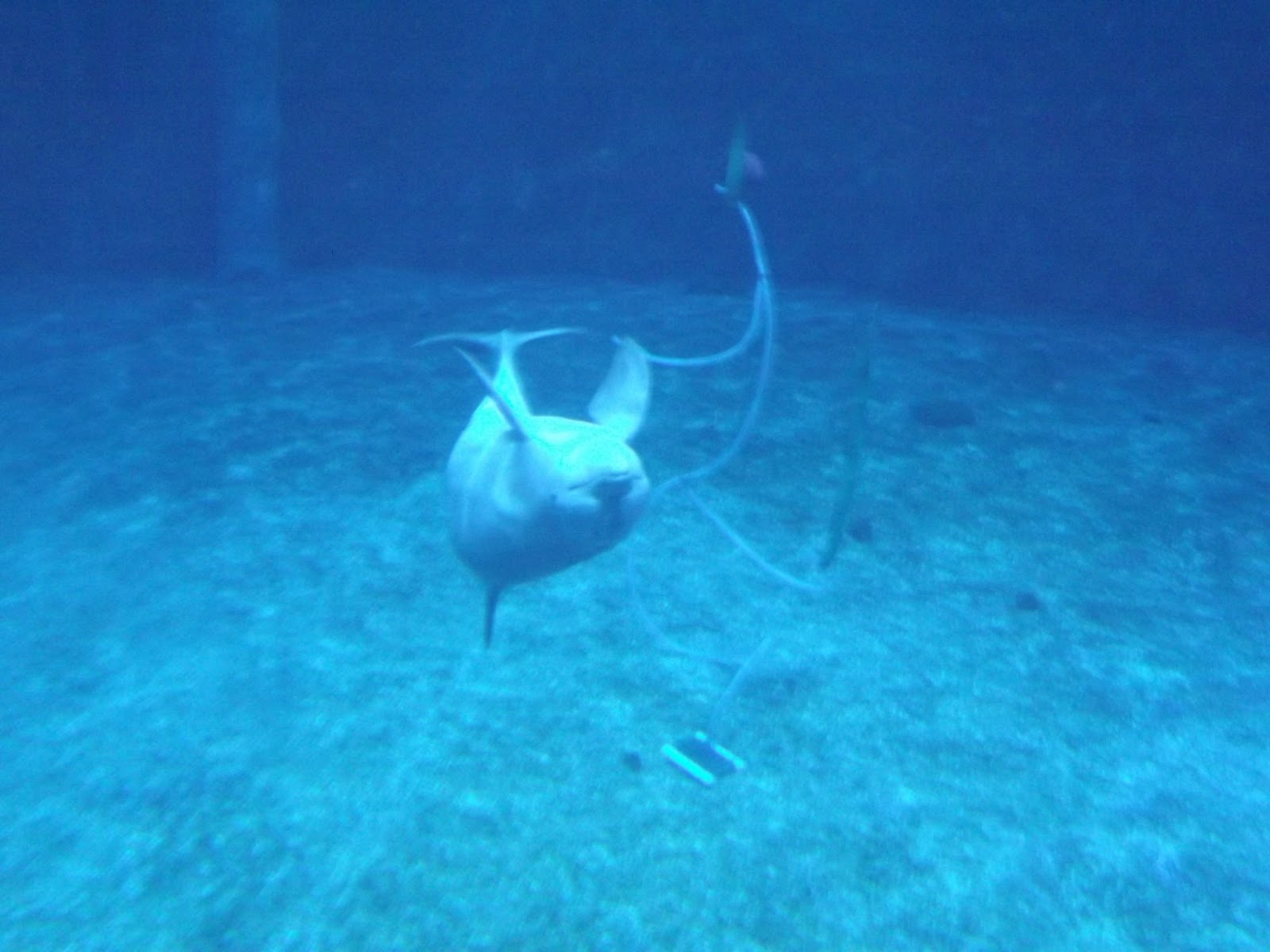 They do have enrichment devices inside the tank but they also do research projects to help us learn more about these beautiful creatures.  The research is completely voluntary, so if a dolphin does not want to  participate that day, the Disney Cast Members have to put on the show by speaking to the guests & you can still view the beauty of these mammals swimming around. They have great eyesight & can hear whistles / clapping through the windows.  So they do know what to do & when they perform correctly, they get tasty treats.  The last time I saw Malomar, they were matching signs in a multiple choice selection.  One window had the symbol they wanted him to go to, then when he was given the sign to go to the second window, there were three symbols including the one from the first window.  If he chose the correct one, we all cheered for him.  It was fun to see him know that he did well by our cheering. 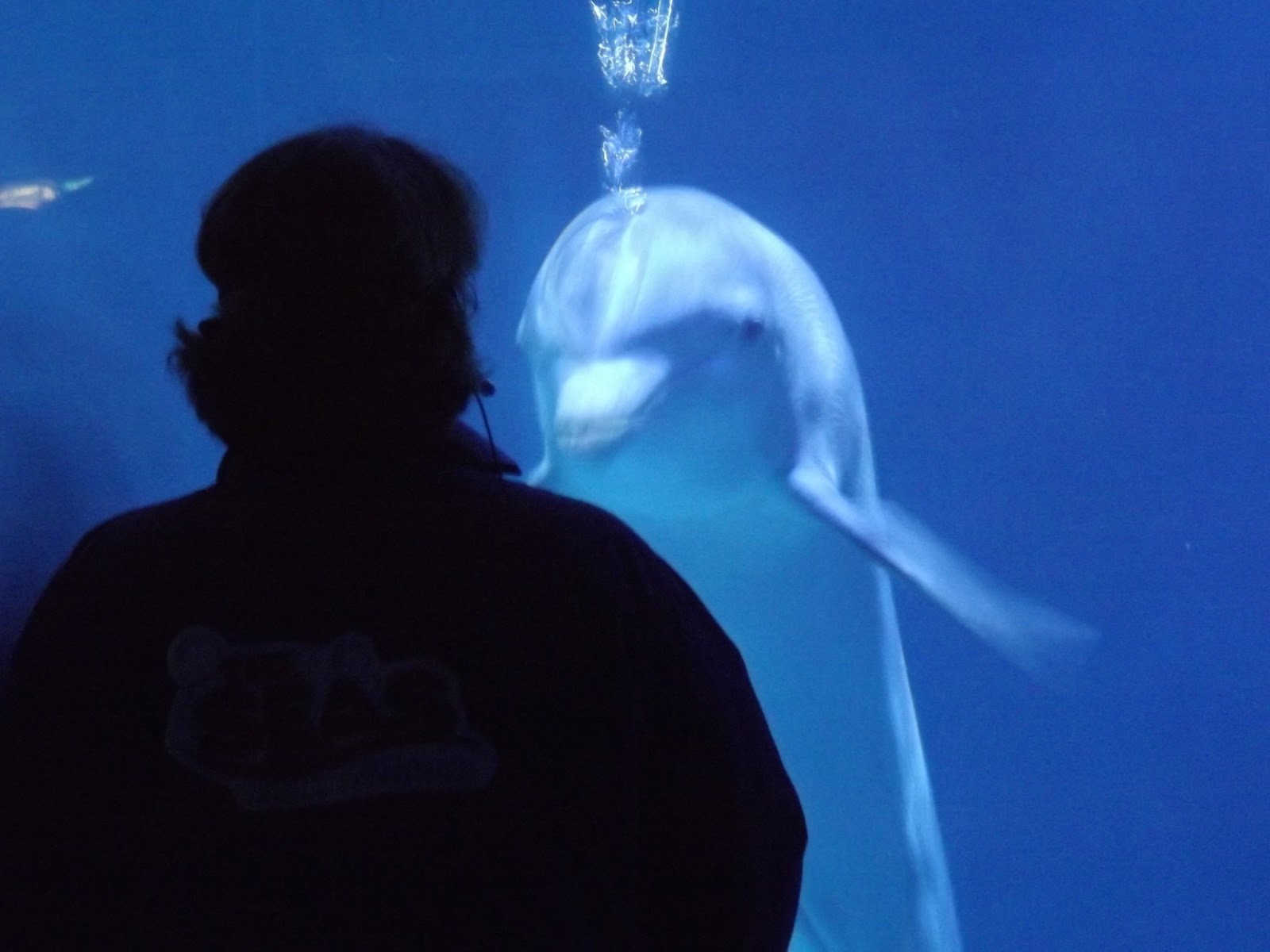 This time the research was giving him a sort of choreography in the water.  They would give him a sign for "bubbles," "twist," or even a "tumble" - then they would give him the signal to go to the other window & do the "same."  Sometimes he would mistakenly tumble instead of summersault, but every time was so fun!  And he even learned from his mistakes & did the moves correctly toward the end of the trials.

At the end, they give you the opportunity to have your cameras ready and both dolphins come to the window & smile for you...they even swim by waving goodbye.  It is a great show & only lasts around 15 minutes. 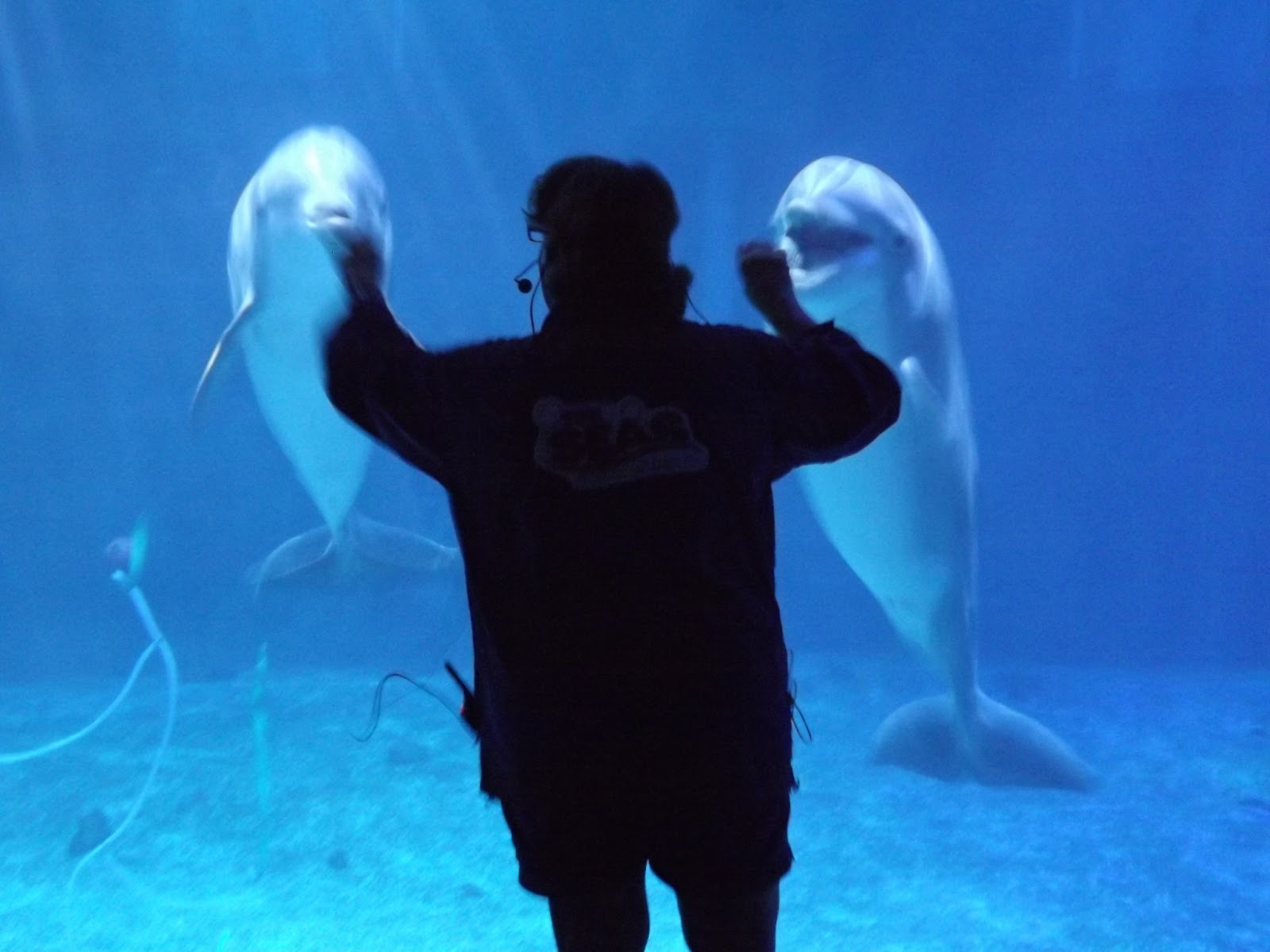 As with every Disney show, there is a valuable lesson to take away.  In this case, we learn to never feed wild animals.  By feeding them, it gets dolphins & other sea creatures too comfortable with boats, which can injure them and teaches us that human food will make them sick.
That's Malomar on the left & Calvin on the right.  Next time you're in EPCOT, make sure you say hi...don't just keep swimming on by!