The ducks at The Peabody Hotel in Orlando, Florida 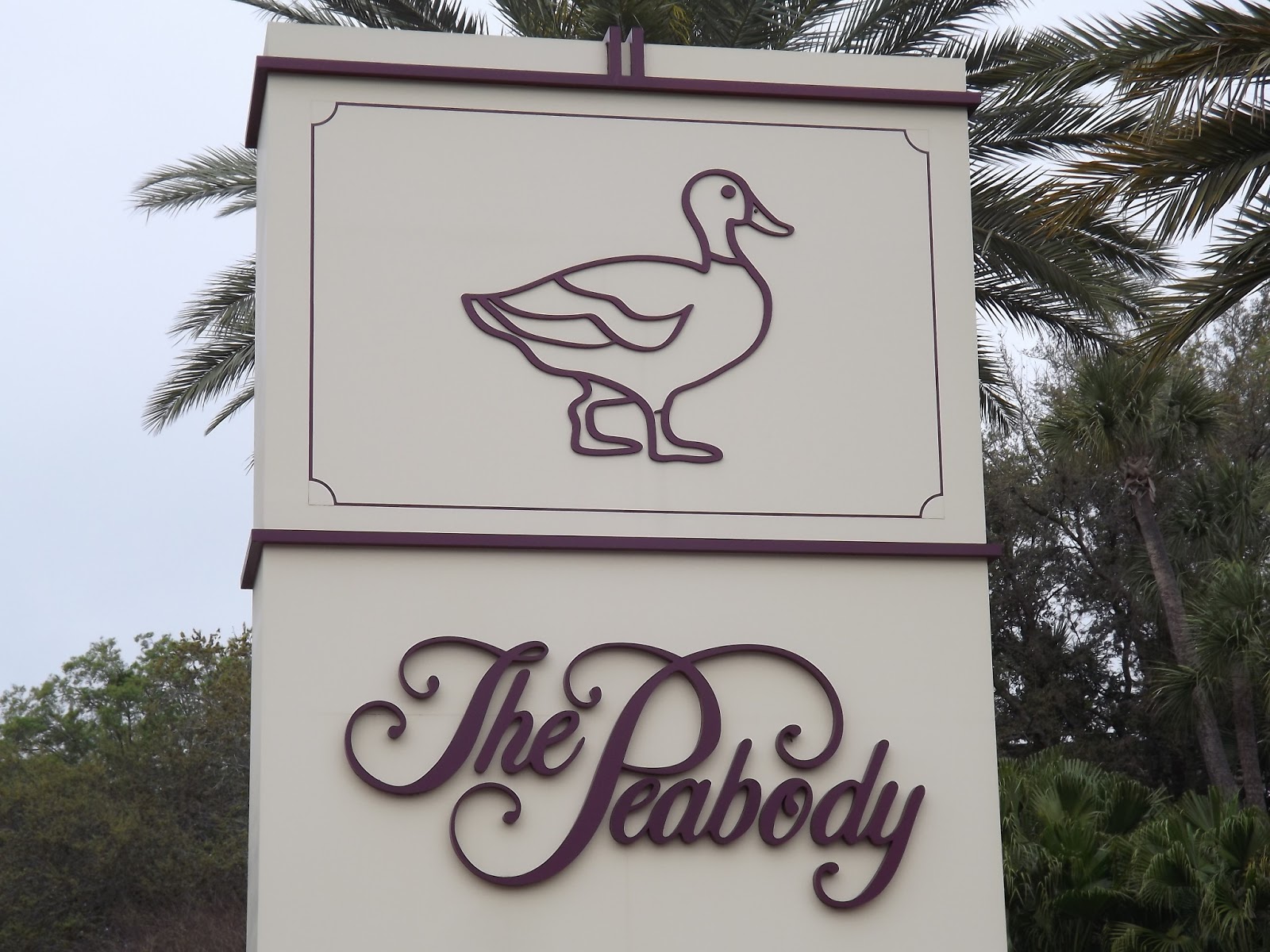 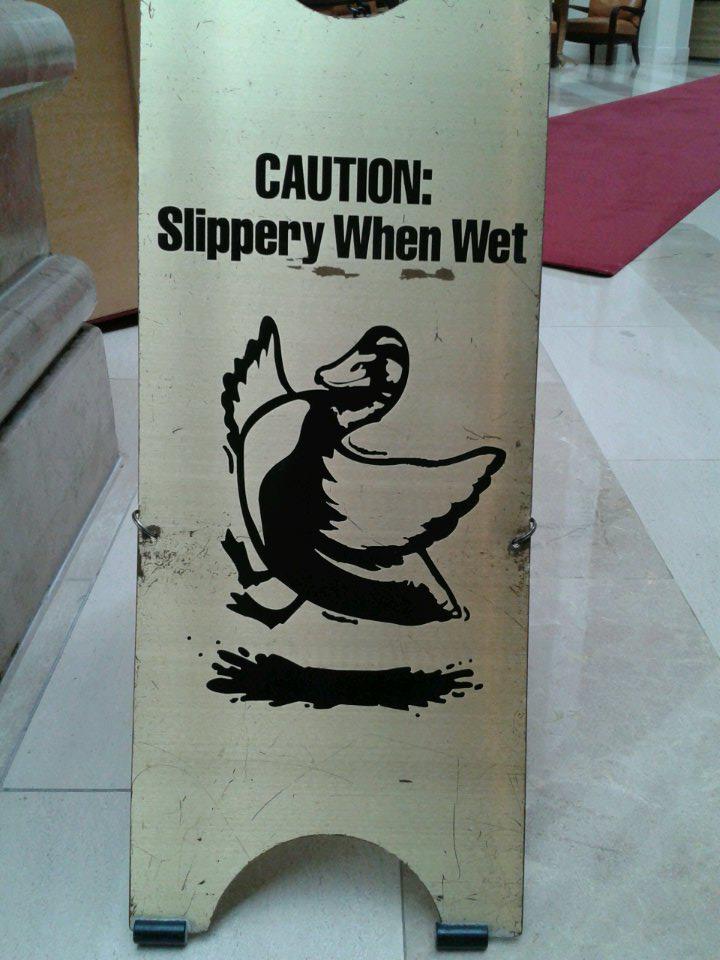 Orlando, Florida is filled with all sorts of special moments with traditions and stories that I believe deserve attention.  There is a great story behind the "World Famous March of The Peabody Ducks" and you can witness this march twice a day, 365 days of the year at The Peabody Hotel. 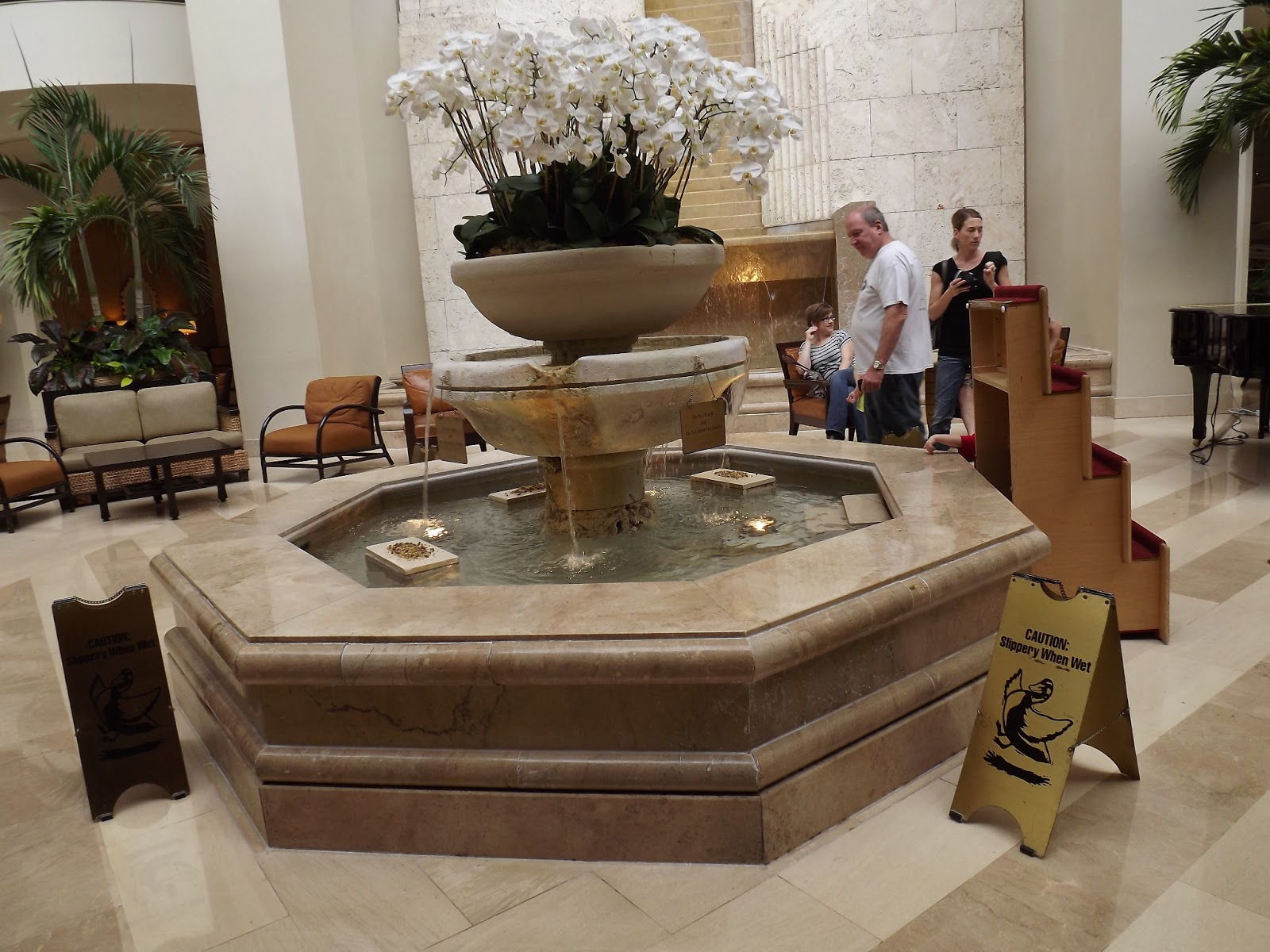 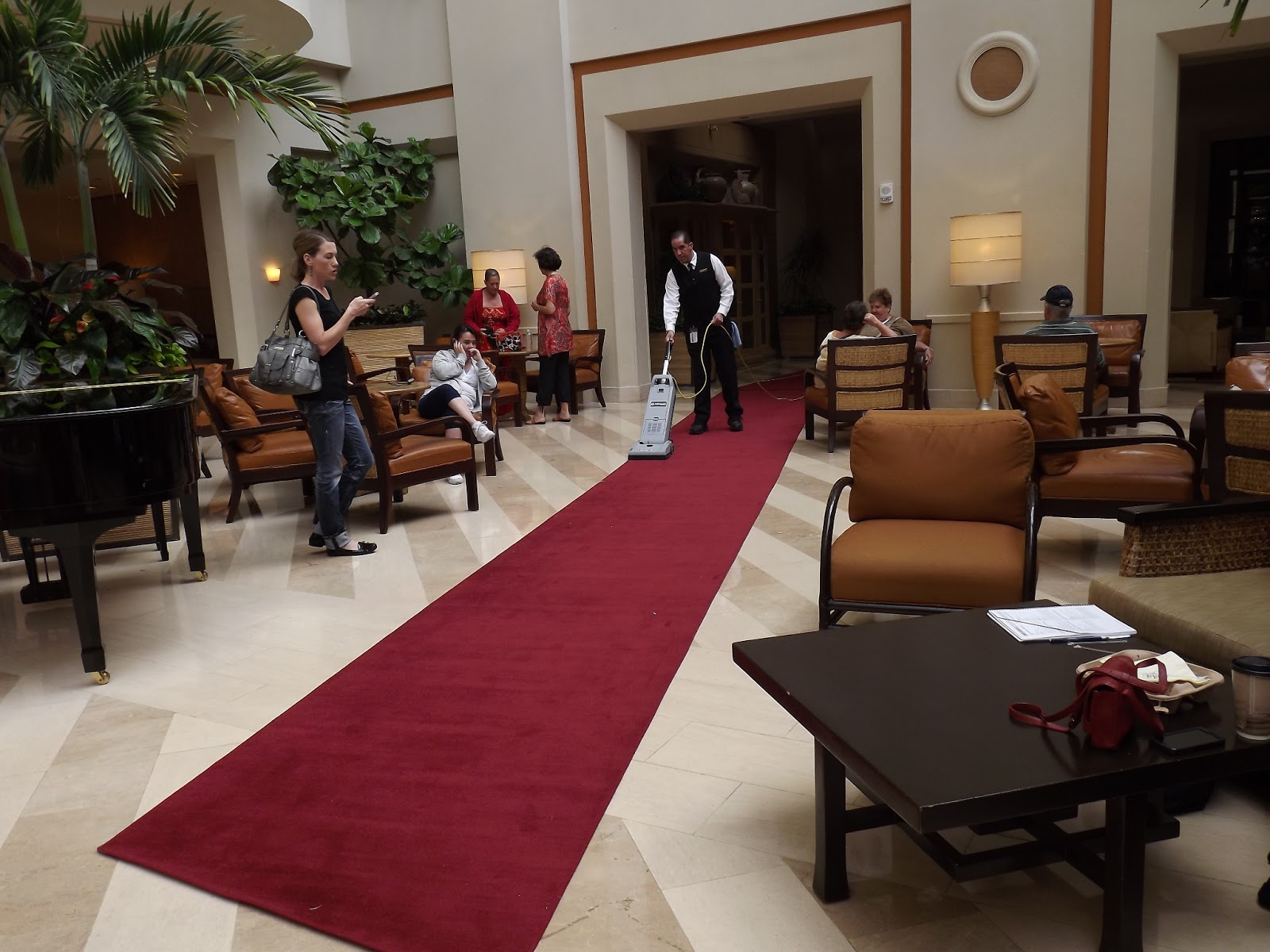 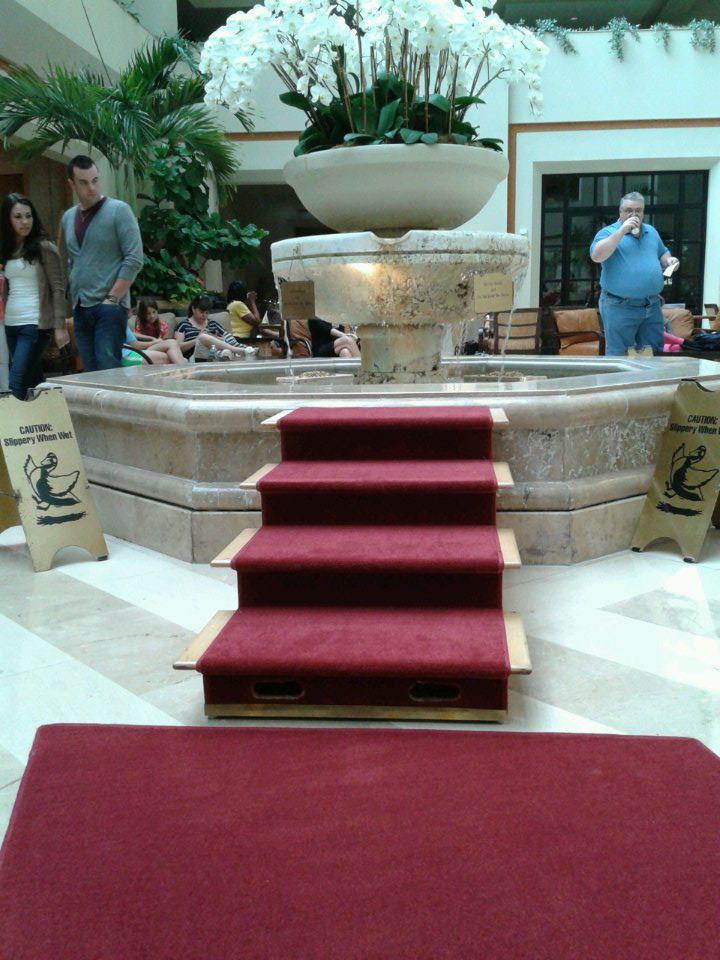 The true story is that in the early 1930's, the General Manager of The original Peabody Hotel in Memphis, Tennessee came back from a hunting trip to Arkansas with his good friend.  Back in those days it was legal for hunters to use live decoys and the buddies thought it would  be fun to place live duck decoys in the Peabody Fountain.  They used three small English Call Ducks and the reaction was very enthusiastic.  That was how the tradition began and since 1933, you can take part of this event every day.  The original ducks have long since passed, but their descendents still grace the beautiful marble fountain in the hotel's Atrium Lobby.

Daily around 10:30am, the preparation begins as someone vacuums the plush red carpet.  Soon after, The Duckmaster puts the steps in place for the grand march.  At 11am, The Duckmaster gives a wonderful description of the story behind the march and if you're interested, you can even work out in advance to be an "Honorary Duckmaster for the day."  Soon, the ducks are led down from their $100,000 "Royal Duck Palace" in their own special elevator.  The red carpet leads straight from their elevator down the marble halls and past a crowd of onlookers.  Come early, good viewpoints fill quickly. 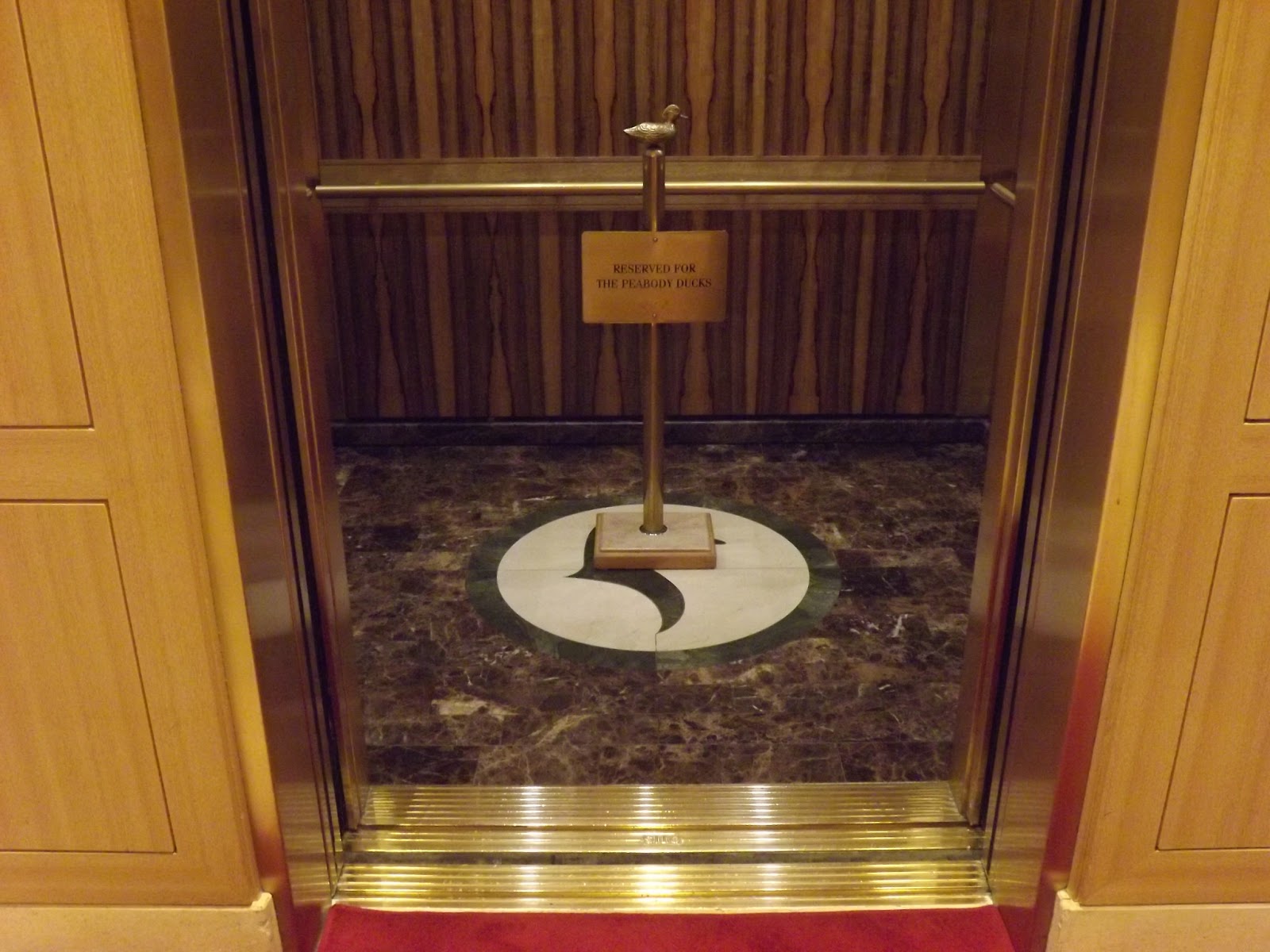 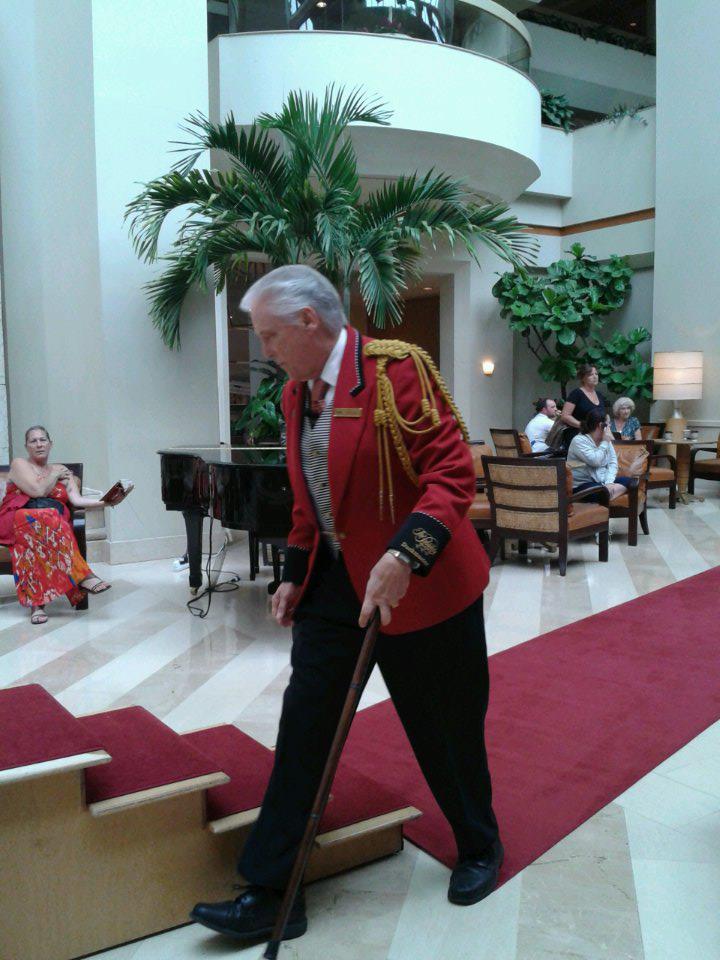 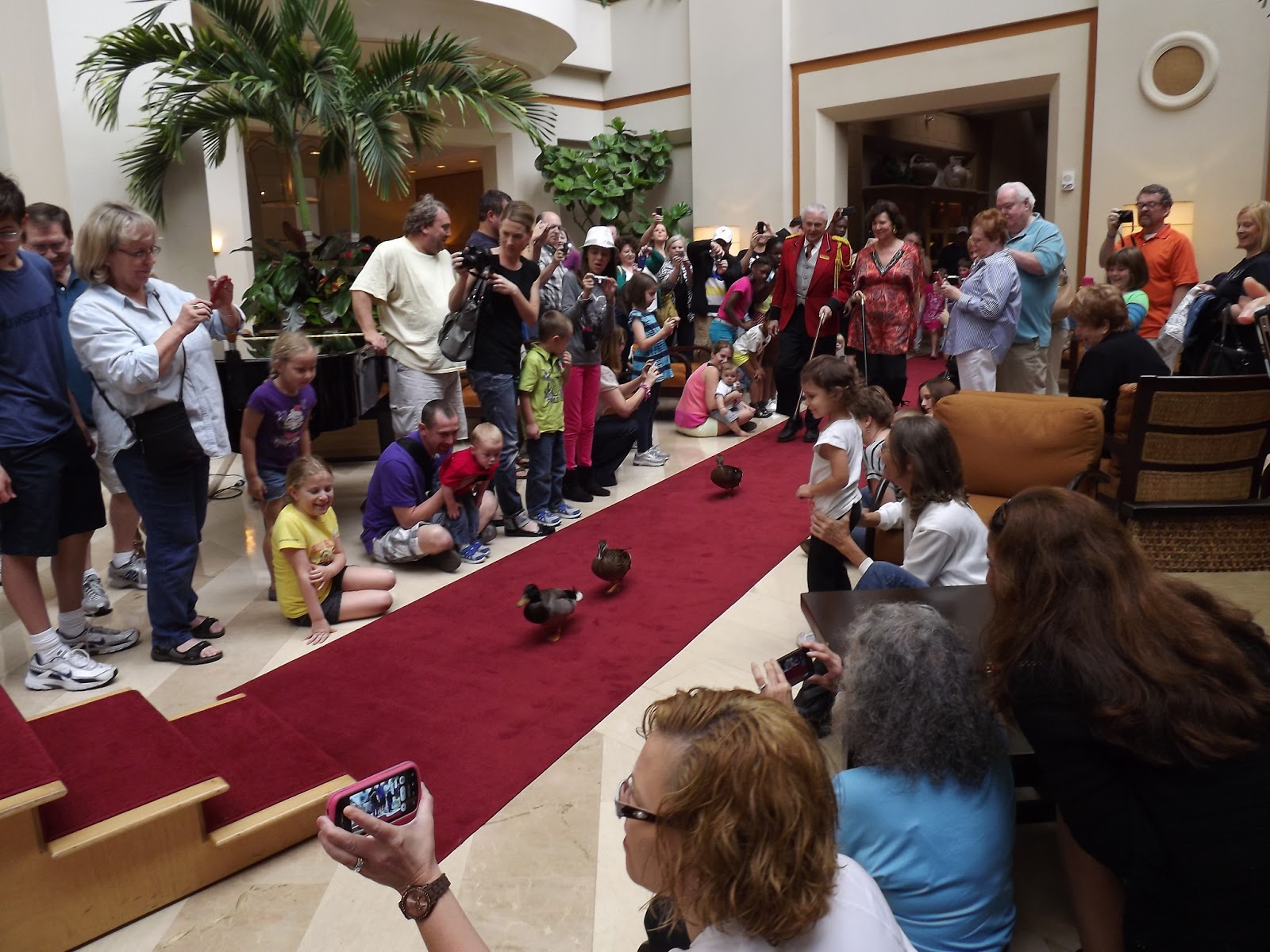 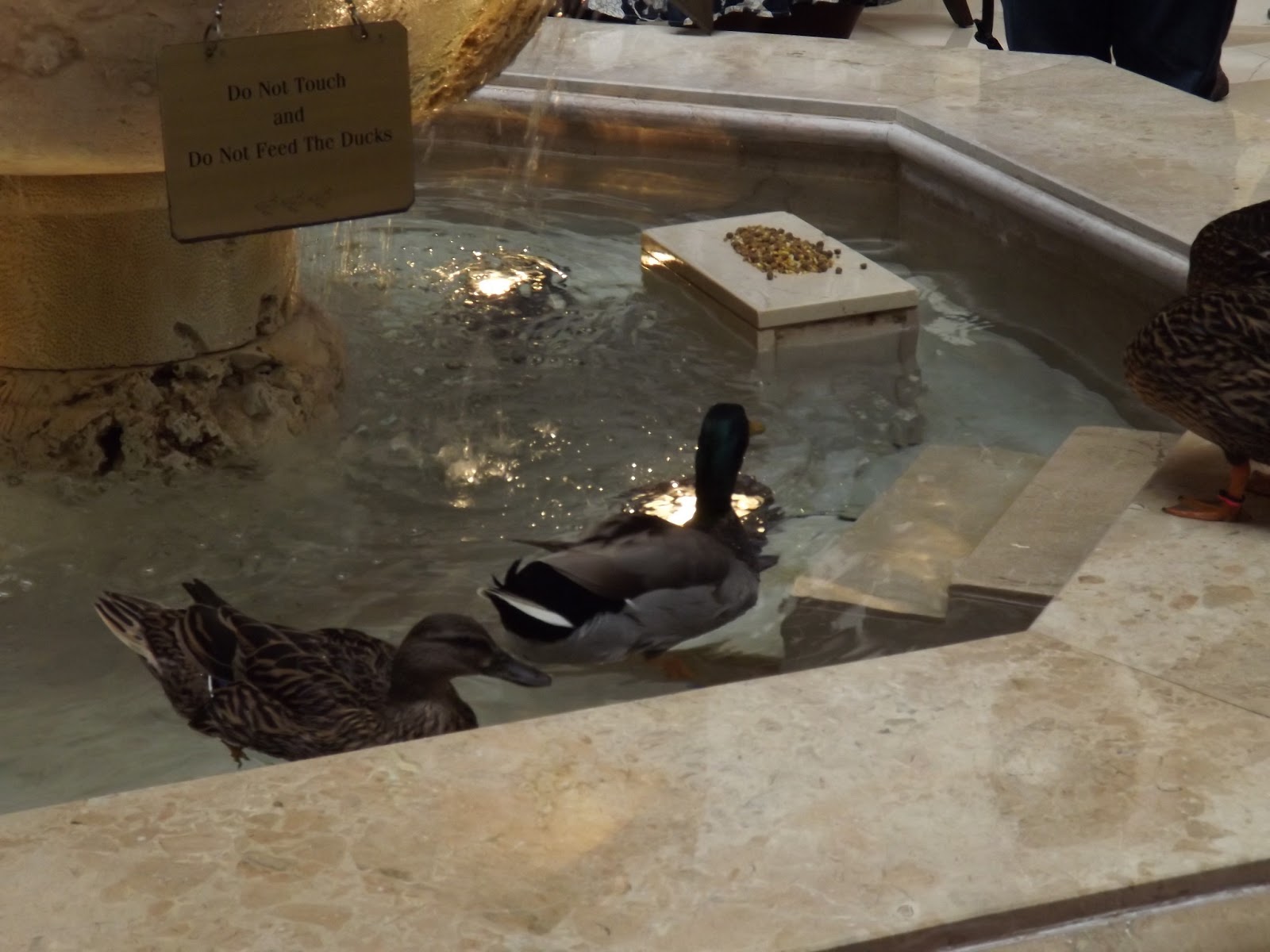 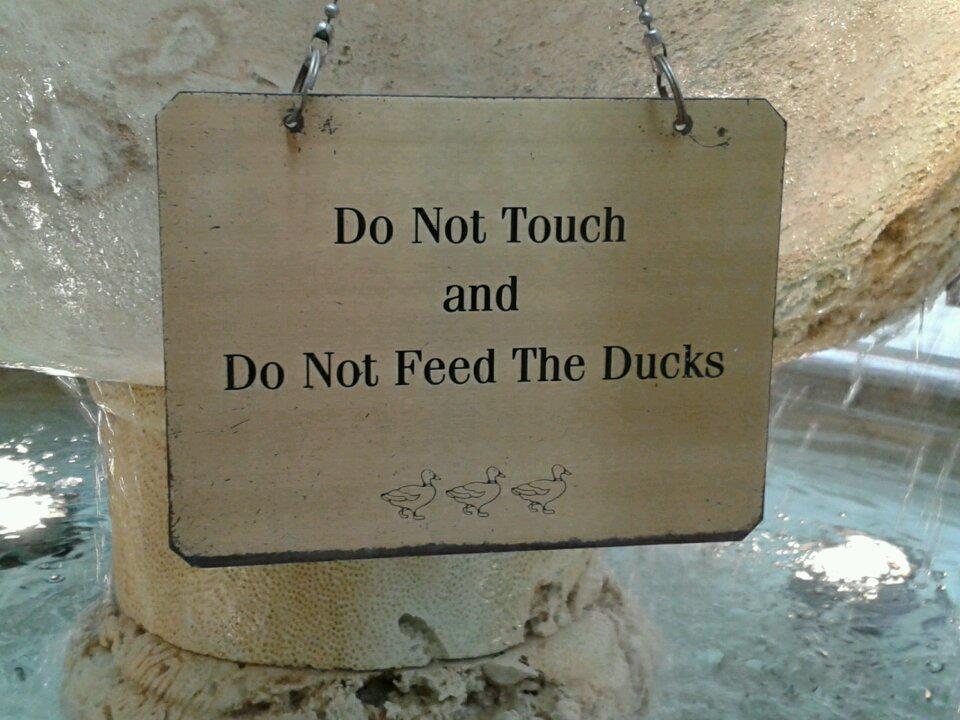 The 5 marching North American Mallard Ducks are wild.  They don't spend enough time in the hotel to keep them from adapting back into their natural, wild habitat.  At 5 years old, the ducks retire and there is a farm near each hotel.  Currently, there are three families of ducks and on the day I was there, we had the youngest family of ducks at around 1-year-old. 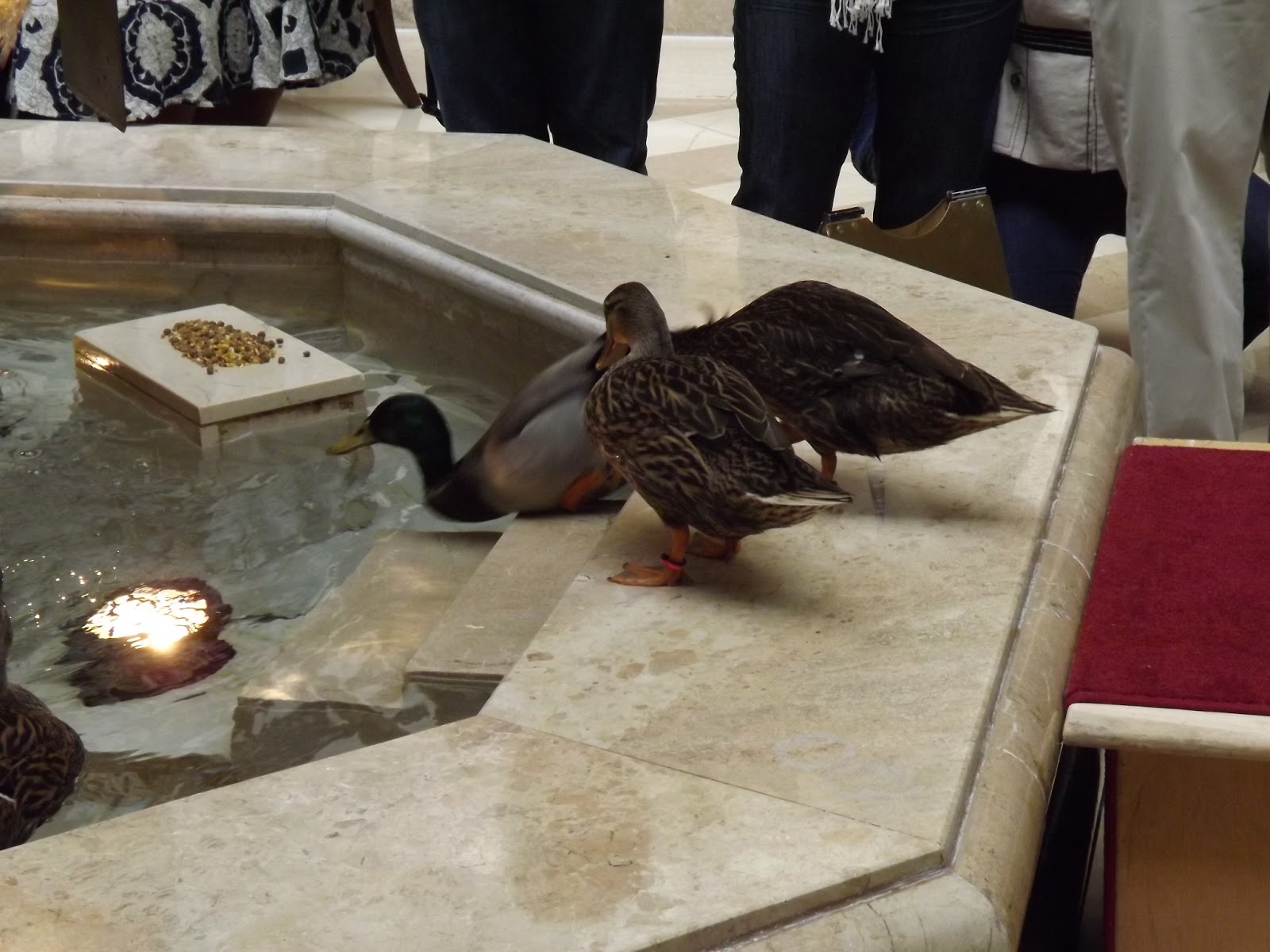 After the ducks march in to the tune of John Philip Sousa's "King Cotton March" you are welcome to speak with the Duckmaster, and take pictures. You can even take the elevator to the Rooftop, past the tennis courts and see their Royal Duck Palace.  The ducks are available in the lobby atrium for 6 hours a day, from 11am to 5pm. 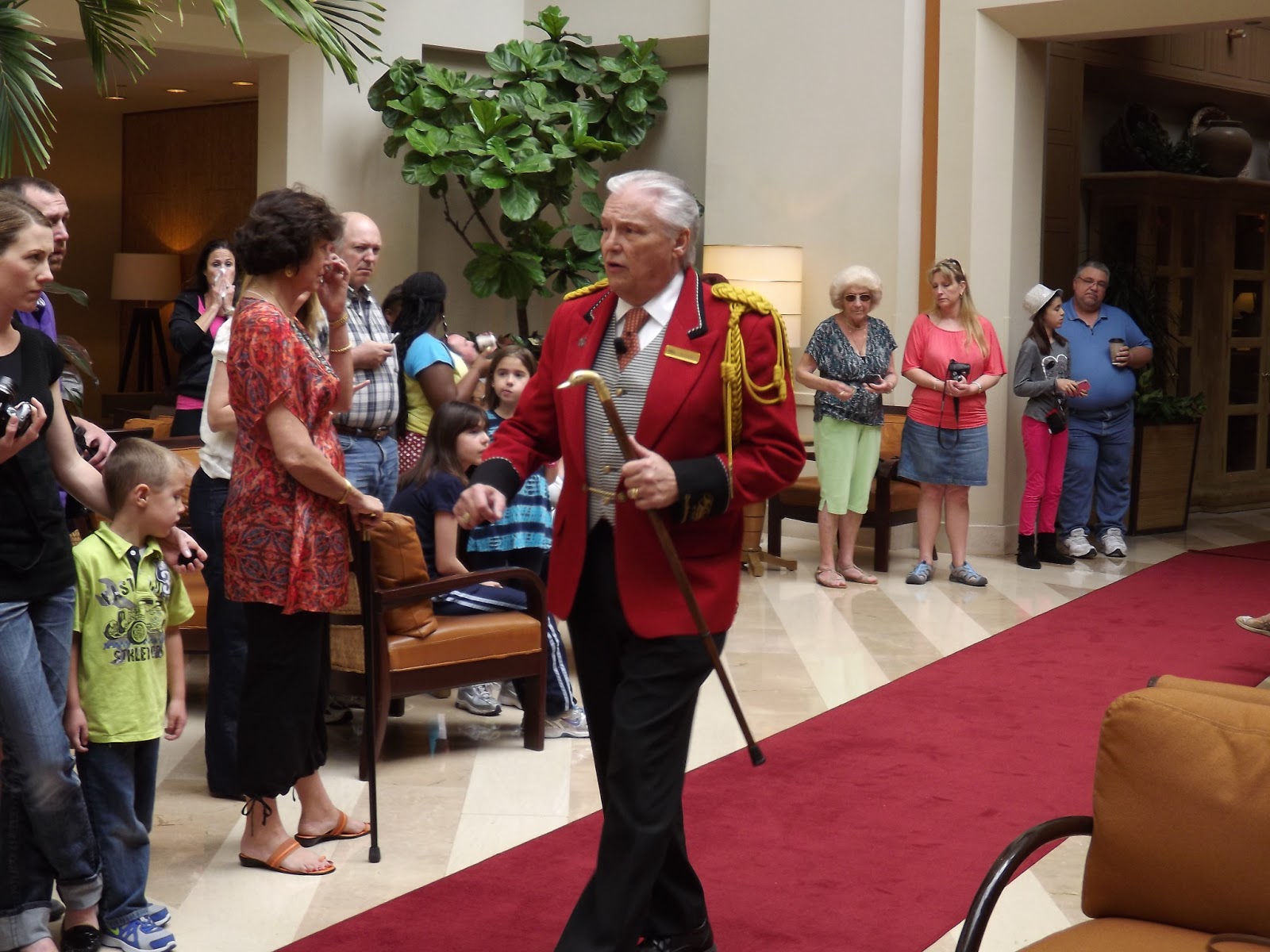 The Peabody Hotel is the only organization that can use the title "Duckmaster" and they have a Duckmaster and march of The Peabody Ducks at each hotel location: 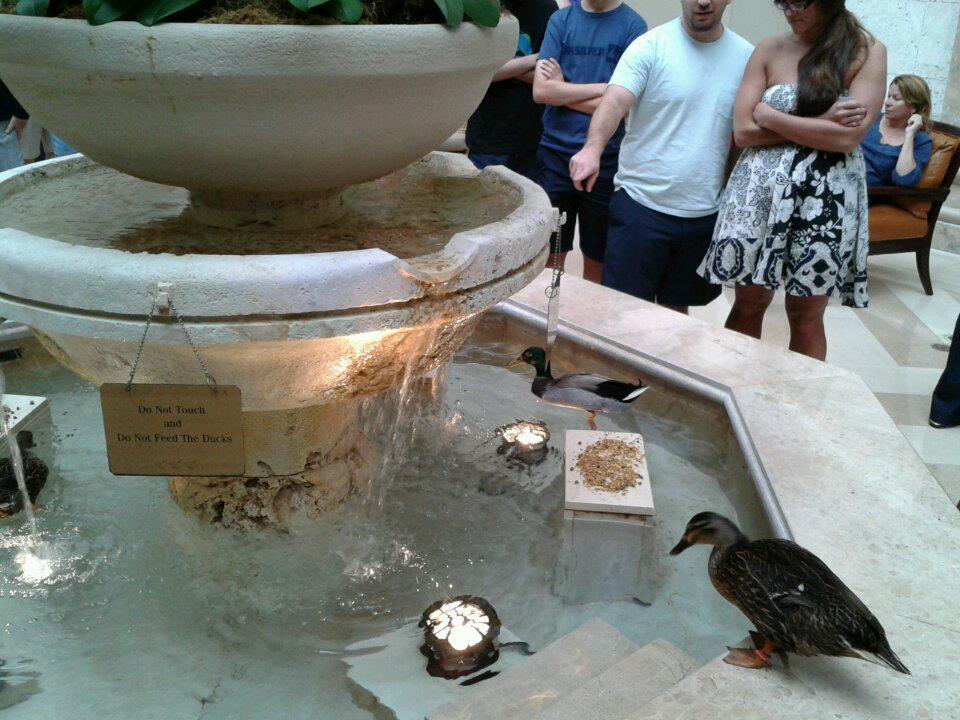 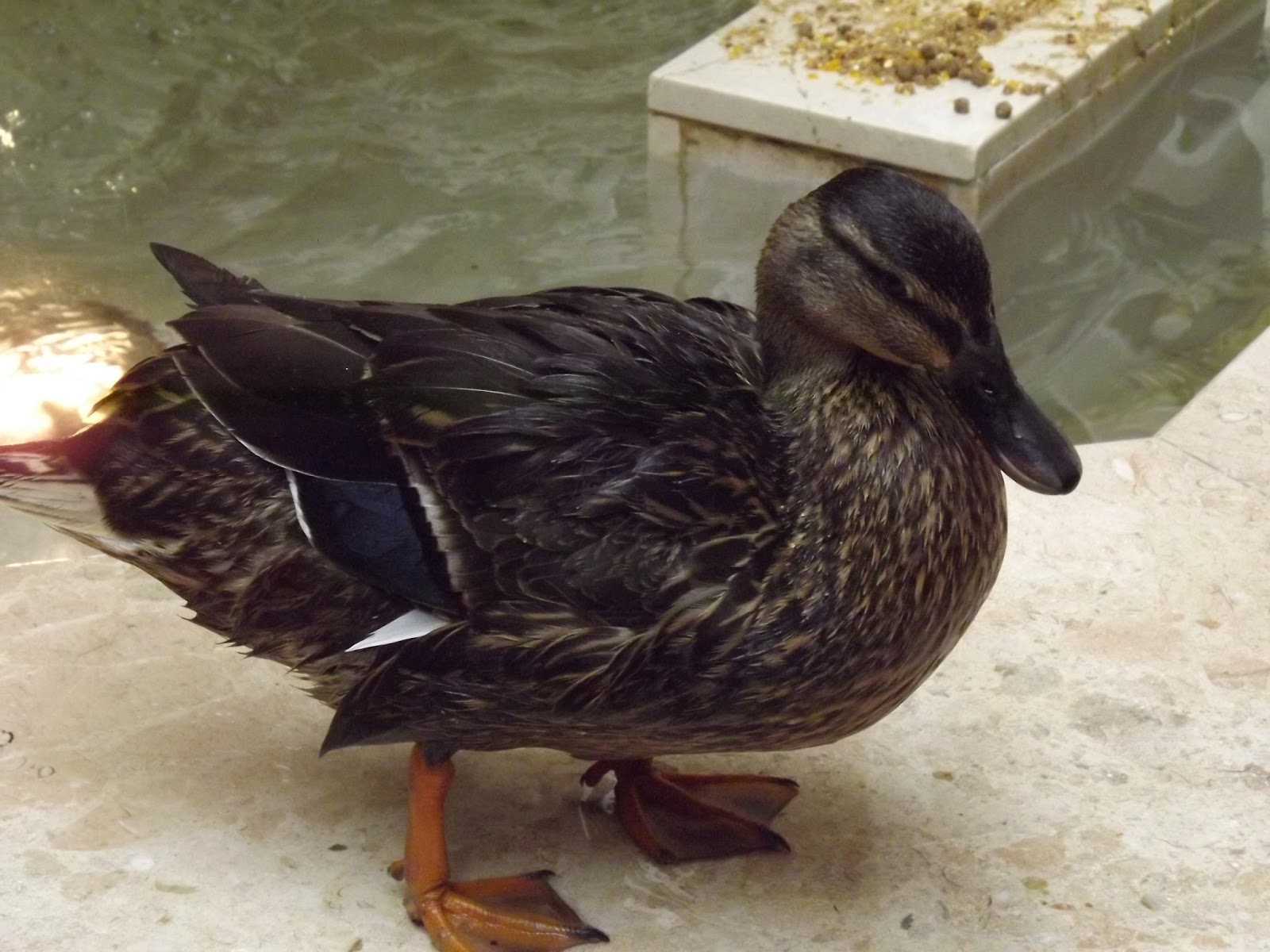 I truly enjoyed this wonderful slice of Great American History as well as hearing Donald the Duckmaster tell of the wonderful historic tradition.  And yes, his name truly is Donald - what a great job to be a Duckmaster in Orlando with a name like Donald...I love it!  You do not need to be staying at the hotel to watch the march of the ducks, but parking in their garage is $14 for 30 minutes - 8 hours.  If you don't want to park in the garage, there are not a lot of parking areas around but they are on the I-RIDE Trolley system. 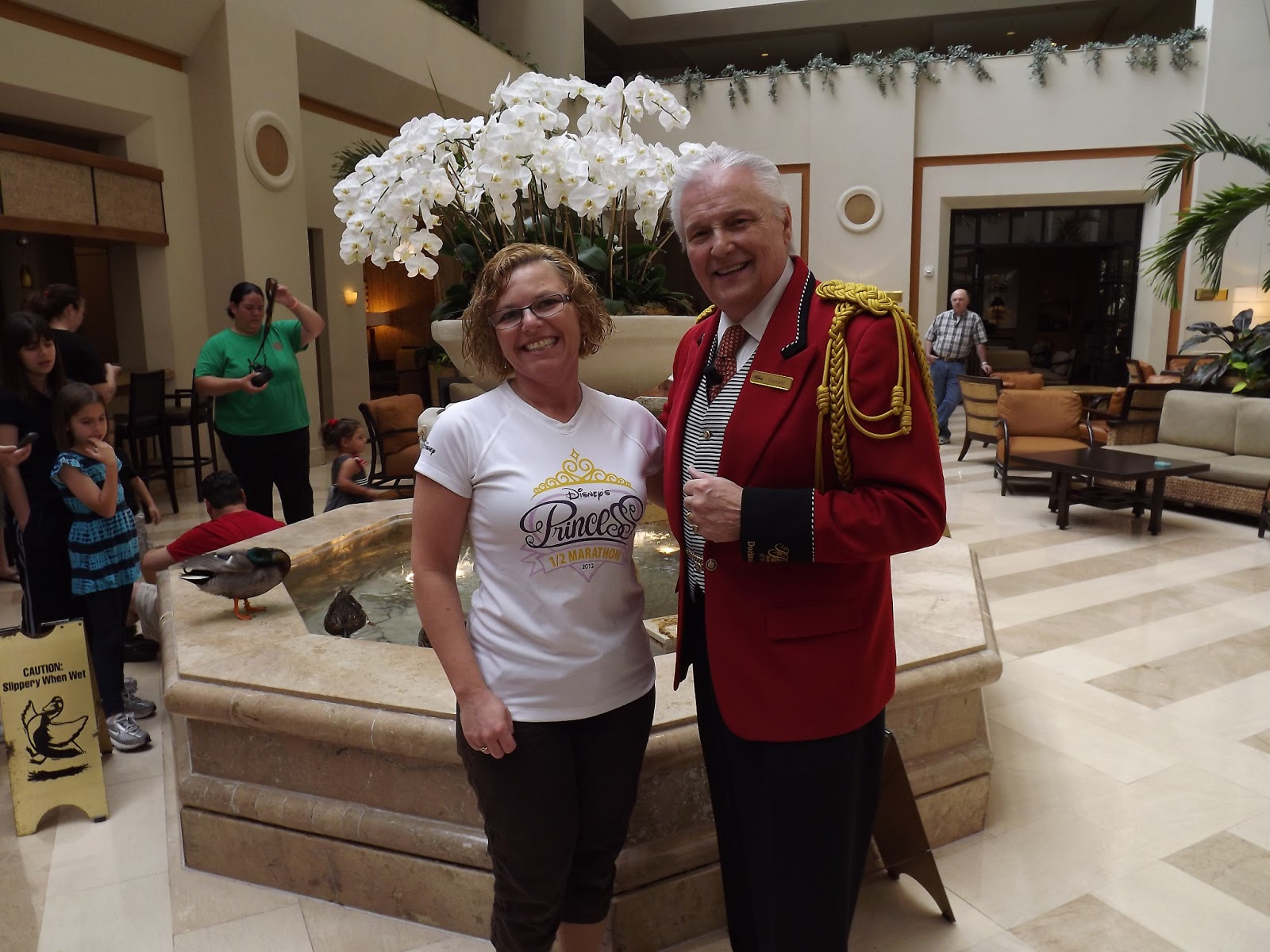 If you'd like to find out more, check out www.peabodyorlando.com
If you'd like to see my personal video of the March of the Peabody Ducks to  John Philip Sousa's "King Cotton March" copy this link into your browser: 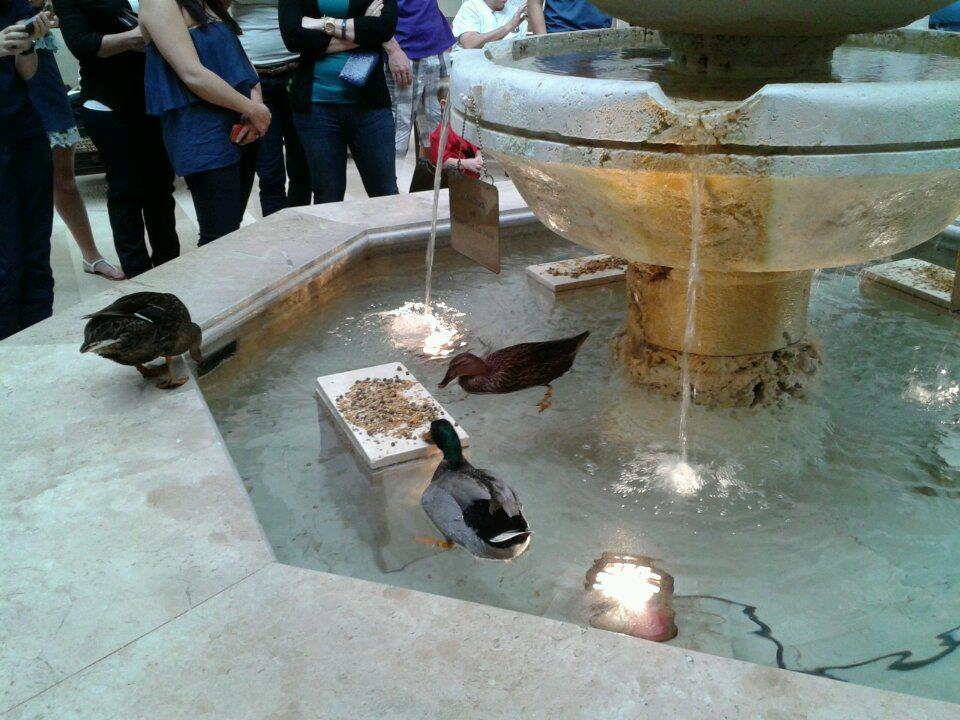 I'd like to say a special thank you to Donald the Duckmaster for his time and say hello to the nice ladies from Rhode Island that I met as we awaited the grand entrance...Orlando is always a great place to meet wonderful people from around the world!